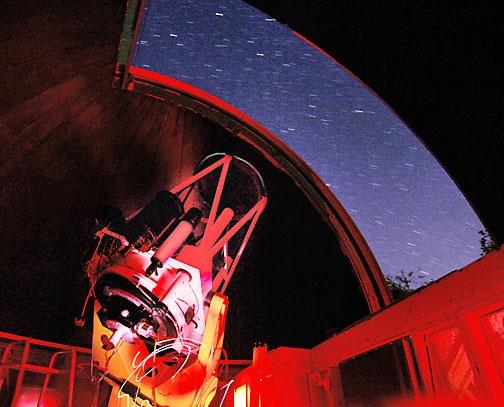 The 32-inch telescope is a Ritchey-Chreitien optical design and was built by DFM Engineering. A Guide-Acquire Module allows multiple instruments to be mounted on it, although the main instrument is changed out at the straight-through focus. Other ports are used for autoguiding cameras. The telescope’s control system may be controlled with Software Bisques’ program, The Sky.

The imaging camera is an Apogee (now Andor), Alta U42 camera with an 20482 E2V CCD. It has the thermoelectric High-cooling option that can cool it to -30 to -60o C, depending on the ambient temperature.

The camera and filter wheel are controlled with MaxIm DL.

Used primarily for eclipsing binary research by Dr. Daniel Caton, it does < 1% differential photometry with exposures of <10 to ~60 seconds (depending on filter), down to about 14th magnitude.

DSO has three spectrographs available for use with the 32” telescope:

The Gray-Miller (GM) Cassegrain Spectrograph is a classification resolution spectrograph capable of collecting optical spectroscopic data. There are five reflection gratings available for use. The two most commonly used gratings are:

This spectrograph has been regularly used in spectral classification surveys and to monitor chromospheric activity via the Ca II K & H lines. Many of the examples of spectra obtained using the GM spectrograph can be found in Stellar Spectral Classification (Gray & Corbally 2009).

The Kelly Anne Kluttz Ebert (KAKE) Spectrograph is a medium resolution (R = 15,000) cross-dispersed Ebert spectrograph that was specifically designed to study the hydrogen line cores, Ca K & H line variability, and the Fe and Ti line strengths of Herbig Ae/Be stars and shell stars. In the cross-dispersed mode, this spectrograph is capable of simultaneously imaging three wavelength regions: 3890-3990 Angstroms, 4865-4890 Angstroms, and 6490-6640 Angstroms with an estimated limiting magnitude of mv ~7 (the limiting magnitude will be tested once the conversion to a fiber fed bench mount is complete).

This spectrograph can also be reconfigured to use a blocking filter instead of cross dispersion to image a single wavelength region which allows for observations of fainter objects (mv ~ 8).

When the blocking filter is used and the wavelength region is centered around 6425 Angstroms, a telluric free region of the spectrum is provided that can be used to determine radial velocities and chemical abundances.

Additionally, software (the Robotic Spectroscopist) has been developed by Dr. Richard Gray to automate spectroscopic observations using the GM Spectrograph on the 32” telescope. This software is capable of closing and reopening the telescope according to current weather conditions, is capable of cross correlating crowded star fields to center on the object of interest, and has been proven to be very efficient at data collection. On occasion, the Robotic Spectroscopist has collected around 130 spectra over the course of a single night.

Support research, education and public outreach through a donation to the Dark Sky Observatory.